Nicaragua is the second-poorest country in the Western Hemisphere, ranking close behind Haiti. Moreover, San Juan de Limay is considered to be one of the poorest areas in Nicaragua. The “municipio” (similar to a U.S. county) of San Juan de Limay is a rural district in the northwest part of the country, not far from the border with Honduras. It includes the valley town of San Juan de Limay and 40-50 surrounding villages. The majority of people in Limay have no employed work. They subsist on the plants they grow, the animals they raise, and the simple houses (often two rooms, traditionally of mud and sticks) they construct for themselves.

From the start, Casa Baltimore/Limay has regularly sponsored delegations of everyday people from the Baltimore area to visit Nicaragua and specifically Limay. These typically occur once or twice per year. The most recent delegation to Limay was in late July 2005. 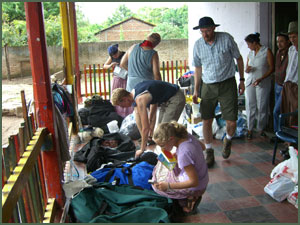 Delegations carry donated material aid, such as medicines and toys. We also sponsor delegations from Limay to visit Baltimore every few years; the next such delegation of seven persons is expected in November 2005.

Apart from the delegations, some of the first Casa Baltimore/Limay projects, in 1987, were the construction of six classrooms in the elementary school of the central town; building a playground in the town plaza; and donation of an all-wheel-drive emergency vehicle to transport people to the nearest hospital in Esteli, 1 ½ hours away. (The town now has its own hospital, completed in 2004.) Other early projects included start-up for a women’s sewing cooperative and support of an adult literacy program, 1989-1991.

We began supporting the CENIC child care/nutrition center in late 1991. 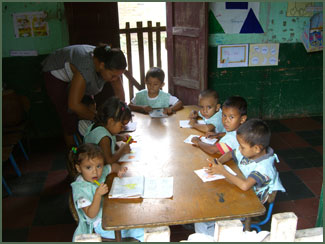 This program feeds and educates roughly 80 of the poorest preschool children in the central town of Limay. Initially, we fully supported the CENIC at a cost of about $12,000 per year. In recent years we have shared this funding responsibility with another friendship-city program which links Limay with L’Esquirol, a town near Barcelona in Spain.

In 1997 we sponsored Sara Matlin as our U.S. representative to Limay. She lived and worked “on the ground” in Limay for about nine months. At that time, phone service in Limay was almost non-existent, and there was no email. As a result, communication had been difficult with the Limay committee, in between delegation visits. Sara greatly facilitated our communication by sending us regular letters. (In recent years, communication has improved as telephone service has increased. We now speak by phone each month; and we are also able with some lag time to communicate via email, whenever someone travels to Esteli to handle this task.)

Between 1985 and 1997, we had gradually become aware that aid projects, though crucial, weren’t enough. More was needed to assist the municipality toward economically and ecologically sustainable development. With Sara Matlin’s help, we began the Phil Mitchell Memorial Revolving Loan Fund, which has grown and continues to this day. It provides microcredit to start and augment small businesses, and to repair homes of families with the means to repay a housing loan. At the present time, the fund stands at over $30,000. Of this, almost $16,000 is lent out for housing repair, with loans ranging from $100 – $500. Over $11,000 is owed by microenterprises, whose loans range from $30 to $200. The small businesses include, for example, a bakery, a saddle-making shop, bicycle repair and sales, soapstone artisanry, a butcher shop, and various small grocery stores.

In late 1998, Hurricane Mitch struck hard in Limay (as in much of Nicaragua and Honduras). Unceasing rain for over a week flooded the Limay area, killing some and displacing many. At least two villages were “disappeared” by rivers which swept away the houses. Four more villages, and several neighborhoods in the central town of Limay, lost a lot of homes; 969 houses were seriously affected — 477 totally destroyed, 492 partially destroyed. Altogether, in an area with 13,575 inhabitants, 46% (6,306) became “damnificados”, i.e., refugees, displaced or destitute.

Over the next months, many NGOs came to the area and helped with rebuilding and repairing houses.

Nearly all of them then left again, long before the crisis ended; but Casa Baltimore/Limay is one program that has remained. We believe it is our ongoing relationship, over the past 20 years, which has made us credible to the local inhabitants.

During all this time, our Baltimore committee has worked closely with its Limay counterpart committee to fund and administer projects. Between November 1998 and June 1999, Casa Baltimore/Limay raised over $50,000 in grassroots aid for Limay. Much of this was used for food and medicines. The remainder went for housing and latrine construction, along with additional funds sent later. By late 2002, Baltimore funds had built 21 new houses in the central town and surrounding villages; by mid-2004, the number grew to 40.

Significantly, directors on our Limay committee were also on the board of directors of the John XXIII Institute, a Catholic organization through which (by late 2002) they had administered the construction of 117 additional new houses. Baltimore funds partially contributed toward 30 of these houses as well. The Limay committee also obtained funds from other sources to construct 12 other houses.

Recently, the pace of housing construction has slowed, primarily because funding has decreased with fading public memory about Hurricane Mitch. Nevertheless, the need for new housing is still painfully evident in this area, which has still not fully recovered from Mitch’s devastation, let alone its long history of poverty.

The new homes are simple yet solid, generally of brick with tin roofs, with tile floors in the living room but dirt floors in other areas closer to internal courtyards. The recipients of the houses provide their own unskilled manual labor whenever possible toward the construction, under the direction of hired skilled labor.

In 1999, we noted that food continued to be in short supply. The people of Limay needed help to replant basic staple crops and community vegetable gardens, so that they could grow their own food. We provided the funding for seeds, tools, and technical training for sustainable organic community gardens in several villages, and also donated three cows to one village.

During this period, we began three other projects which have continued to the present. We pay for tuition and travel expenses for twelve post-secondary students who travel to Esteli to pursue higher learning. We provide funds, at least $100 per month, to enable poor people to buy prescription medicines. We also fund a project to feed almost 200 elderly and disabled people whose families are unable to help them.